Coverham Abbey was founded circa 1187 - 1188, not in Coverdale, but in the parish of Pickhill  on the banks of the river Swale at a tiny spot called Swainby. It was a Premonstratensian Abbey founded by Helewise wife of Robert Lord of Middleham. The Lords of Middleham were closely linked with Coverham Abbey. The choice of the Premonstratensian order was significant, it was favoured by Ranulph de Glanville, who was first a Sheriff of Yorkshire and then a very efficient Justiciar for King Henry II. His family promoted the order of Premonstratensians, and Helewise was his daughter. Helewise died circa 1195 and was buried in the Abbey at Swainby, and her three sons continued being patrons. It was the next generation who moved the monastery to its present site at Coverham, nearer to Middleham Castle, in 1202.

After the dissolution of the Abbey the site and the Granges throughout Coverdale went into lay ownership. The site of the Abbey and adjoining mill went to Humphrey and Cecily Orme, then to the Croft family, then the Bainbridge family and finally was sold to the Wray family. A Dorothy Wray married a Robert Atkinson, and it went to Wray Atkinson. He died in 1777 and Coverham Abbey came to Edward Lister. Edward Lister was described as a merchant of Hunslet in Leeds and a relation of Wray Atkinson, but his family were from the Bedale / Aiskew district. He married Jane Hodshon in 1777 and they had twelve children between 1779 and 1802. 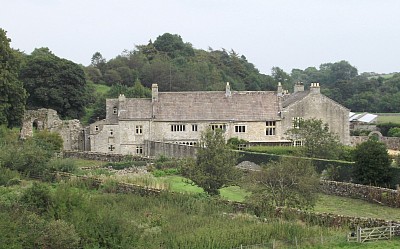 In 1810 a pig got into a field that belonged to Miss Jane Lister of Coverham Abbey. Jane ordered her servant to drive the pig into the yard and lock it up in a building . The owner of the pig, with his wife, son, daughter and son in law then arrived to rescue the pig, and according to the court records with scurrilous language and violent threats attempted to get their pig back. They broke down the door of the building and drove the pig away, striking at Miss Isabella Lister. They all ended up in court. 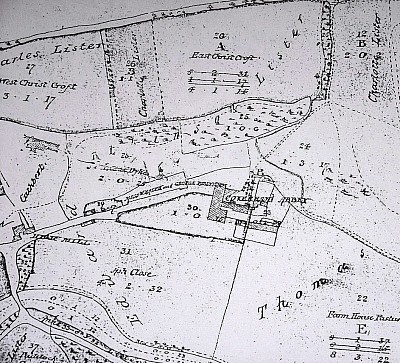 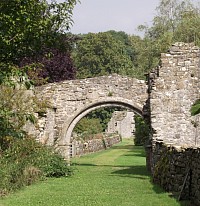 The neighbouring Abbey at Jervaulx in the parish of East Witton was developed as a tourist destination in the nineteenth century by the Earl of Ailesbury. Antiquarians came to visit it, reports and surveys were made, and a letter to the editor of the York Herald on the 29th June 1875 compared the two Abbeys of Jervaulx and Coverham, with the latter coming in for much criticism. ..... Had I not seen with my own eyes the disgraceful state - I use the word advisedly - in which this ruin is permitted to remain. I certainly would not have believed it .... a portion of the building is converted into a cow shed, a part of the south aisle is made a receptacle for dung .....I may add that this Abbey is a rich storehouse of interesting archaeological detail, and well worthy a visit, despite the obnoxious features above named .....
Fortunately it is not in that state today, but it is in private ownership and not open to the public. There were stone effigies propped up in a yard which would once have been in the Abbey.

The Yorkshire Archaeological Journal vol xxv, published 1920, gives a detailed report of what remained of the ruins in 1913.