on a barn at Arkleside 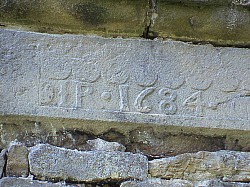 on a barn at Gammersgill 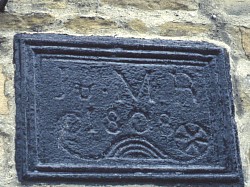 on the Thwaites Arms, Horsehouse 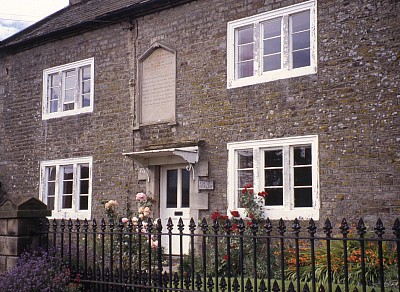 In the middle of the village of Carlton there is a farm house with a curious stone above the front door. This is Flatts Farm, and the inscription was written by the "Bard of Coverdale" who was Henry Constantine. He wrote many verses, and you can pick out the epitaphs that he composed on several gravestones in Coverham churchyard. This stone was meant to be his own memorial and reads - He wrote from knowledge, genius kind / Opened the casket of his mind / Poured out the essence of his worth / Endurance followed from his birth / Hope, that blessed gift of heaven / Hope to every mortal given / Hope which soothes the inward breast / Hope for heaven's eternal rest. 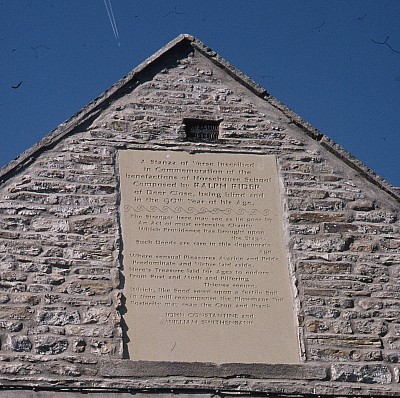 In the village of Horsehouse there is a poem on the building which used to be the school. It reads -  A stanza of verse inscribed in commemoration of the benefactions of Horsehouse school composed by Ralph Rider of Deer Close, being blind and in the 90th year of his Age - A stranger here may see as he goes by / An Act of most extensive Charity / Which providence has brought upon the stage / Such Deeds are rare in this degenerate Age / Where sensual Pleasure, Avarice and Pride / Predominate and Virtue laid aside / Here's Treasure laid for Ages to endure / From Rust and Moth and Pilfering Thieves secure / Which, like seed sewn upon a fertile Soil / In time will recompense the Plowman's Toil / Posterity may reap the crop and thank / John Constantine and William Swithenbank. 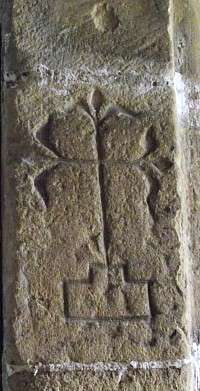 in the doorway of Coverham Church

This stone is in the doorway of Holy Trinity church and hints to a very early foundation. OR the stone could have been reused from a different building. But it is thought that there was a church on the site before the Coverham Abbey was built in 1202. Churches had box pews which had individual ownership, you could leave your pew in your will. Pew disputes arose when a parishioner sat in a pew that was not his or hers. In 1634 Francis Topham took to sitting and kneeling in a pew that belonged to the family of Adam Loftus, which he had allowed his sister, Mrs Marie Bulmer to use. Francis Topham then brought timber to the church to enahnce and rebuild this pew, he arrived at the church with some of his friends and relations, and one, Anthony Appleby went to the curate's house to get the key. A little while later the Curate's wife went to see what they were doing and was attacked in the church so that blood flowed from her head to the ground and a little child was pulled from her arms and flung to the ground and trod on and terrified another little child . And Coverham is in such a tranquil and peaceful setting ! 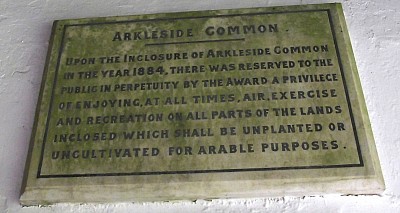 in the porch of Horsehouse Church

Open pastures are used for common grazing, and individual farmers own grazing rights for a given number of animals, these are called sheepgaits or cattlegaits. The local Manorial Court laid down rules and regulations as to when and how many animals could be grazed. Gradually, over a long period of time some of the large commons were enclosed and allotments allocated to those who had formerly had grazing rights. The Enclosure Award described the boundaries and named the owners and occupiers of particular properties who had grazing rights. The Award for Woodale and Bradley in 1792 named Christopher Wyvill, John Yeoman, Michael Errington, George Watson, Matthew Beck, James Shaw and Henry Alderson. 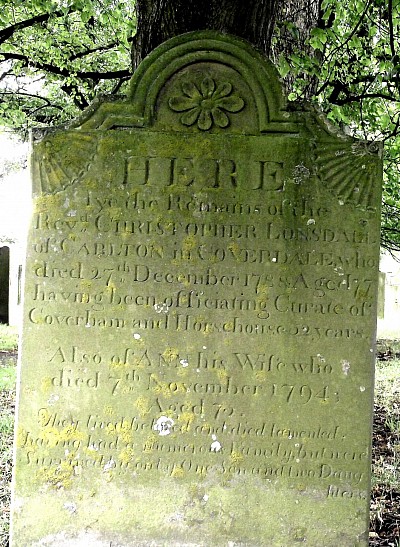 Here lye the Remains of Christopher Lonsdale of Carlton in Coverdale who died 27th December 1788 aged 77 years. Having been officiating Curate of Coverham and Horseshouse 52 years. Also Ann his wife who died 7th November 1794 aged 75 years. They lived beloved adn died lamented having had a numerous family but were survived by only 1 son and 2 daughters.
The Reverend Christopher Lonsdale was indeed the perpetual curate for Coverham and Horsehouse, but he began his career as a schoolmaster at Ainderby Steeple and was then nominated to the living of Coverham in 1737. Sadly the registers were very badly kept during his incumbancy. During the 1750s and part of the 1760s there are many gaps. Rev C Lonsdale appeared to get into debt and at one time had a long list of creditors to whom he assigned over £20, but this was not enough and he then appeared in the Richmond House of Correction as a debtor. 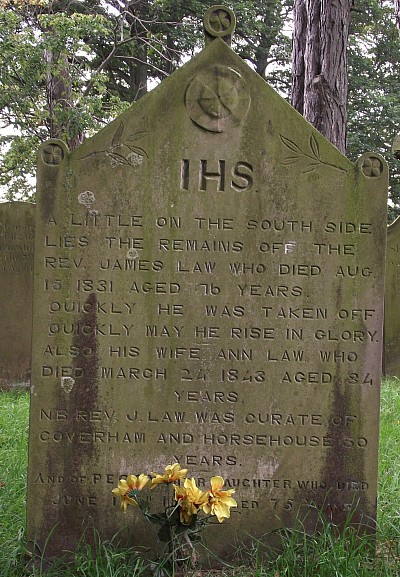 A little on the south side lie the remains of the Rev James Law who died 15 August 1831 aged 76 years. Quickly was he taken off / Quickly may he rise to glory. And his wife Ann Law who died 24 March 1843 aged 84 years. NB Rev James Law was curate of Coverham & Horsehouse for 50 years. Also Peggy their daughter who died 13th June 1878 age 85 years.

James Law was a poor stipendary curate, born in Sedbergh he married Ann Tennant in Aysgarth. He was well regarded and served the parish well, but in 1796 was a recipient of a gift from a Charity for Poor Clergyman as his stipend was only £35 per annum and he had six children to support.